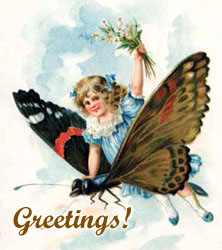 In social settings, when asked what it is we do for a living, we simply state that we have a website called urngarden.com and toss it back. Despite our enthusiasm for the service we provide, sometimes the reaction is that we sell Amway. Nobody wants it.

How about the guy in Oklahoma City that sells skulls? Skulls Unlimited bills itself as the world’s leading supplier of osteological specimens. He has a storage unit full of human skulls, most imported from China. Started as a home based business, he boiled skulls on his stove.

Or the White Ladies who have started a business that would spread the cremated remains of clients over western Montana publicly owned wild mountain peaks and flower-studded meadows.

For $390 the White Ladies will scatter the ashes and provide a ceremony, a photograph, journal notes and Global Positioning System coordinates of the final resting place. Ten percent of the cost would be donated to groups who work to protect wild lands.

But the Forest Service has long had a firm policy against commercial scattering, said Gordon Schofield, the group leader for land use here in Region I. If ashes are scattered â€œthe land takes on a sacredness, and people want to put up a marker or a plaque, Mr. Schofield said, then they oppose activities they do not see as compatible with the site as a resting place.

But this is a bad day at work:

That’s what happened to a computer technician reformatting a disk drive at the Alaska Department of Revenue. While doing routine maintenance work, the technician accidentally deleted applicant information for an oil-funded account — one of Alaska residents’ biggest perks — and mistakenly reformatted the backup drive, as well.

There was still hope, until the department discovered its third line of defense had failed: backup tapes were unreadable.

“Nobody panicked, but we instantly went into planning for the worst-case scenario,” said Permanent Fund Dividend Division Director Amy Skow. The computer foul-up last July would end up costing the department more than $200,000.

Over the next few days, as the department, the division and consultants from Microsoft Corp. and Dell Inc. labored to retrieve the data, it became obvious the worst-case scenario was at hand.

The ultimate back up: The paper trail.

Last October and November, the department met its obligation to the public. A majority of the estimated 600,000 payments for last year’s $1,106.96 individual dividends went out on schedule, including those for 28,000 applicants who were still under review when the computer disaster struck.