Surreal seems to be where death services are going, even if only a small percentage make it into the extreme zone. “Some things done at memorial services or celebrations of life would absolutely mortify some traditional types of people,” says Janet Riscuitti, director at Funeral Services Association of British Columbia. “There are no rules any more. A meaningful ceremony might be held on a beach and everyone will bring their surfboards.”

There are no rules…and that’s why the funeral directors are challenged.

Example: Ed Headrick’s memorial service was unorthodox, for one thing, he wasn’t even dead. The service took place at Headrick’s bedside in California in 2002, where he lay dying at the age of 78. After his death, Headrick, who invented the Frisbee, was cremated and the cremated remains mixed into 2,000 Frisbees that can be purchased online for $210 US.

That raises questions ranging from the mundane to the mysterious.

If the funeral is without tradition, what are the guests to do? Do they wear black or Hawaiian print? Then there are the big questions. Is a funeral or memorial only for the living? Lynn Greenhough, who serves on Synagogue Emanu-El’s burial society (the Chevra Kadisha), says society now looks on these services as a psychological exercise for the grieving survivors, but this was not always so. When it comes to ancient burial services, Greenhough says, “All these rituals were understood to be helping the soul of the deceased.” Culling tradition from funeral services is symbolic of modern society’s denial of death, suggests Greenhough, adding, “It is … a denial of any possibility of a realm beyond this form. None of us are getting out of this alive. That makes everyone uneasy.”

We’ll close with a serious backwoods superstition that is both heavenly or the work of SATAN. From Vance Randolph’s book on Ozark Superstitions.

Hillbilly Hairball, a prized treasure and very serious business: To find a feather crown or “angel wreath” in the goose down pillow of the dead.

Most hill folk considered the presence of a feather crown in the pillow good fortune and the dear departed had gone straight to heaven. It was especially fortunate to find a perfectly formed crown in the pillow of a “less than deserving” individual, indicating that sins had been absolved and the deceased had a fast pass to the pearly gates.

When the bereaved family finds one of the feather crowns in the pillow of the deceased, the crown is removed from the pillow with great care and displayed to all the neighbors; sometimes there is a mention of it in the village paper, as a sort of postscript to the obituary.

One lady from Little Rock, AR left instructions to be buried with her late husband’s crown in her bosom, he had died 30 years prior, but she kept the feather crown in a box at her bedside.

On the dark side some people considered the feather crowns evil omens, produced by witches which should be instantly thrown in the fire when found.

Vance Randolph refers to another Little Rock resident who examined her pillows every month for suspicious lumps. Her husband was a politician with many enemies and feared witchcraft being employed against the family. The belief was the crowns grow slowly and the whole evil business could be stopped by searching and burning. If a feather crown was allowed to grow to completion, the person who sleeps on that pillow will DIE immediately. 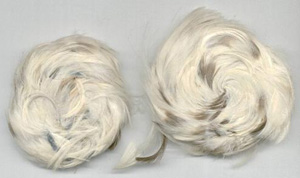 Gloria M., Duck River, Tennessee “These are from my mothers 2 sisters that died at the ages of 7 and 10. These are over 100 years old. My grandmother used to tell me that the presence of these in a feather pillow meant that they went to Heaven. They have never came loose and still feel firm after a century.”