You are here: Home / Advertising / Salt of the Earth Urns 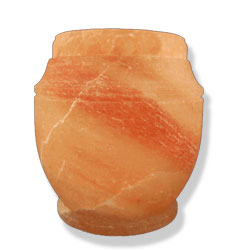 An earth friendly option for families is our Salt Urns. Hand-crafted from solid blocks of Himalayan Rock Salt, the salt deposits in the Himalayas are over 250 million years old and believed to be the purest on earth.

Each natural salt urn is unique in both color and finish. When placed in water, our Salt of the Earth urns will dissolve within 4 hours.

As a precious and portable commodity, salt has long been a cornerstone of economies throughout history.

Covenants in both the Old and New Testaments were often sealed with salt: the origin of the word “salvation.” In the Catholic Church, salt is or has been used in a variety of purifying rituals. In fact, until Vatican II, a small taste of salt was placed on a baby’s lip at his or her baptism. Jesus called his disciples “the Salt of the Earth.”

In Buddhist tradition, salt repels evil spirits. That’s why it’s customary to throw salt over your shoulder before entering your house after a funeral: it scares off any evil spirits that may be clinging to your back.

Shinto religion also uses salt to purify an area. Before sumo wrestlers enter the ring for a match – which is actually an elaborate Shinto rite – a handful of salt is thrown into the center to drive off malevolent spirits.