You are here: Home / Confessions / Days of Our Lives

Greetings! What about this crazy new urn style? Doubt we’ll add it to the mix.Â Most of our clients don’t want to see the ashes and prefer something a little more discreet…..

But Russell Parsons from West Virginia is the winner for most creative final instructions…..

Retired pipefitter, Army veteran and cancer survivor Russell Parsons says he’s not afraid to die and he’s got the tattoo to prove it. Inside the yellow and orange flaming tattoo on his right arm are instructions to the funeral home where he has a prepaid cremation: “Barlow Bonsall cook 1700-1800 for 2 to 3 hours.”

“It’s a recipe,” the 67-year-old widower from Hurricane, W.V., said. “It’s a recipe for cremation.” Linda Wilson, manager of Barlow-Bonsall Funeral Home and Crematorium in Charleston, W.V., said she thought Parsons was joking several weeks ago when he said he was going to have his final wishes tattooed on his arm. “I never thought he would actually do it,” she said Tuesday. She wasn’t the only one. Parsons said the tattoo artist who gave him his first and only tattoo said his request was among the craziest he’d ever received in 22 years. “I told him, ‘Well, take a look because I’m one of a kind.'”

Parsons, who survived a brush with cancer in 1999 and still deals with injuries from his Army service, said not everyone understands his attitudes about life and death. “I’m not afraid of death. I’m afraid of life,” he said. “I’m afraid of living and not being able to take care of myself.” 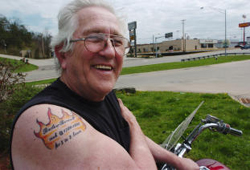