You are here: Home / Memorial Service Ideas / How to Choose Pallbearers for the Funeral & What They Do 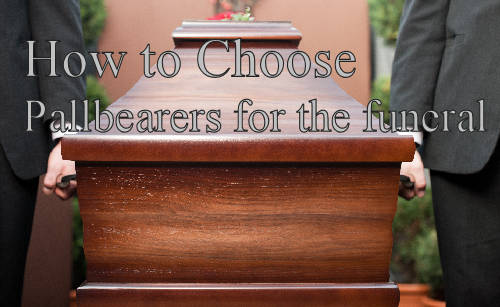 Earlier in the year, it was suggested that I write a post about pallbearers – how to choose suitable candidates, what are their duties and what’s required of them; that sort of thing. I added it to my list of potential topics and, driven by curiosity, I busied myself writing about other topics. Today’s the day; I’m ready to write about what’s involved in selecting and being a pallbearer. If you’re interested in the history of pallbearing, check out the Origin of Pallbearers. “Casket bearer” is another accepted term describing this important role.

What does a Pallbearer Do?

The Duties of a Pallbearer

An active pallbearer is a person whose primary task is to help carry the casket from the place of service to the hearse, for transportation to the crematory (if cremation is planned after the funeral) or to the cemetery for burial. Pallbearer duties may also include participating in the graveside events – and would be responsible for carrying the casket to the gravesite. Because of the ‘heavy lifting’ built into the position of pallbearer, you’ll commonly see men in the role – but women pallbearers aren’t uncommon.

There are two main kinds of pallbearers, active and honorary. Active pallbearers are the ones who actually perform the required tasks. Honorary ones are individuals worthy of recognition, but who have no specific duties are asked of them.

When it comes to pallbearer etiquette, it’s not difficult to understand the need for pallbearers to be ‘on their best behavior’ as our mothers would say. They need to dress appropriately, which could include a suite, tie, dress slacks and comfortable shoes. These are both rather obvious. The funeral director in charge of the service can further advise selectees on what they should wear.

How Many Pallbearers Do You Need?

Who Should Be Pallbearers in Your Loved One’s Funeral

When thinking about how to choose a pallbearer, I’ve used just one criterion: a pallbearer should be someone of consequence in the life of the deceased. But that’s not a hard and fast rule. Take, for example, the 1961 funeral of Ernest Hemingway. It’s an accident that I even bring it up. When preparing to write an upcoming post, I found myself reading about Ernest Hemingway’s death –thinking he could be a feature in a celebrity cremation post (similar to Celebrity Cremations: Isadora Duncan). There wasn’t a story there for that post (simply because he wasn’t cremated). But I discovered a list of the pallbearers who served at his funeral and thought it a point of conversation for this post. Sweet!

Here’s why: the list appeared to be made up of ‘ordinary folks’; some from the town of Ketchum, Idaho, where he had been living prior to his death. There was a doctor, a local rancher and business owner, a photographer from the railroad; just everyday people who came in contact with Mr. Hemingway in the short time he lived there.

As in many larger funeral services, there were both active and honorary pallbearers.

The list of honorary pallbearers was far longer, and included notables from around the world, including a bullfighter from Madrid.

More commonly, the casket bearers are individuals who, as I said earlier, were important in the life of the deceased. For example, at Muhammed Ali’s service, in June, 2016, again there were both active and honorary pallbearers. The men elected to carry the casket included Will Smith, and Lennox Lewis, former Heavyweight Champion of the World, along with select Ali family members. Other boxing greats, such as George Foreman, Larry Holmes and Mike Tyson, will be honorary pallbearers.

More illustrative of the idea pallbearers should be people central in the life of the deceased, the pallbearers at the funeral of former First Lady Barbara Bush were all her grandsons.

2. Choose Someone Who is Physically and Emotionally Strong

Make sure those individuals you choose are physically and emotionally strong enough to participate. Emotional outbursts from the pallbearers can be very disturbing for those in attendance.

With that said, I’d like to end on a lighter note – and maybe plant a seed in your mind about who should be selected as a pallbearer for your loved ones funeral.

You may not realize there are professional pallbearers available for hire, and some put a unique spin on the more common pallbearer duties – they’ll dance. (It’s a tradition in Ghana.) If you have a moment, watch this YouTube video, Professional Pallbearers.

While it’s fascinating, it teaches us that how we honor those we’ve loved is up to us. The responsibility of choosing pallbearers is also an opportunity – to deepen the significance of the funeral service and enrich the experience of those in attendance.