You are here: Home / Confessions / Marigolds and Greek Heritage 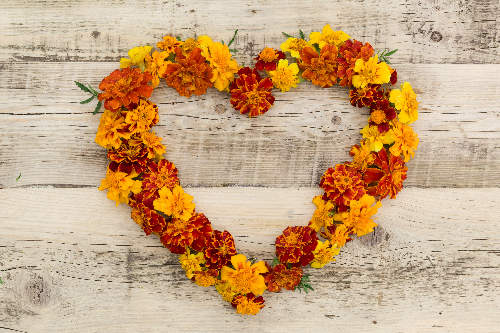 One of our key employees has been dealing with a family crises this past year. Her older brother has been gravely ill and this  has required her to make numerous trips back and forth to St. Louis where he lives. It’s a  large, tight knight, Greek Orthodox clan. Her parents are elderly and her brother, knowing that the end was near, wanted his baby sister by his side. She spoils him.

Earlier this year, he told his sister that he wanted to take a trip to Mexico and stay at his favorite resort. He wanted her to go with him. He was cleared for travel by his doctor, but really, travel was probably not the best idea, and it put a strain on his travel companions. He wound up spending 3 days in the hospital while he was there.

Knowing full well his diagnosis, her brother had made his wishes known and originally wanted to donate his body to science. But in the end, he deferred to his mother’s desire, as she had made it clear that she wanted a traditional burial. It’s only been in the last 12 years or so that Greek Orthodox have allowed cremation.  Gail Ruben wrote a comprehensive article on Greek Orthodox funeral traditions that includes do’s and don’ts, gift ideas, and the reader comments are informative and helpful.

Although, this particular family chose burial, for a Greek family that might be shopping for an urn for the first time, I would probably suggest the Elegant White cremation urn. The shape is a classic design. Crisp white represents the landscape and includes a color from the flag. This urn engraves nicely, and we might even be able to laser an orthodox cross on it with names and dates. The nice thing about this style is the metal work. Details like hand tooled etching that often features ancient design elements like laurel and floral leaves.

The point of this story is to say that I wanted to give her a memorial gift in remembrance of her brother. She loves blooming plants and brings in cuttings from her gardens that brighten the warehouse.  She doesn’t really have room on her desk for an arrangement, but I know she would shuffle to make room. Her yard is full of bushes and blooms and she has spent the last few months digging holes and moving plantings around to create space.   So, she really doesn’t need another one.

I believe in the healing powers of flowers. Especially, this time of year. Around here, everything is still drab. We see little signs of life, greening and buds starting to form, so it won’t be long, and the hummingbirds will arrive in about a week.

Usually, when trying to decide what to pick flowers for an arrangement or gift, I start with the person’s birth flower. For him, October is the marigold. Seriously? It’s not my favorite, but that’s not what it’s about, and the more I thought about it, it seems like marigolds would be a good choice.

It’s an annual and that will suit her just fine. I discovered that the marigold has a Mediterranean heritage. The strong punch of color orange and yellow is happy (and was his favorite color), and even though it doesn’t smell terrific, there are lots of benefits to this flower. They are hardy and could be placed on the patio or by the pool to help repel pesky insects and deer. I’m not sure if I’m going to do a wreath or potted, but I just remembered that there is a large container at the entrance to the warehouse that she keeps stocked with seasonal plantings. It’s just dirt now and might be a welcome site when she returns to work.