You are here: Home / Confessions / Anchor Cremation Urn for an American Sailor

Recently, a mother’s story about her son’s Navy service was so touching that it brought tears to my eyes. She called about an urn we carry, a beautiful midnight blue vase with a shimmering anchor made from mother of pearl. No mother should have to go urn shopping for her child, but when she saw it she knew it was the one. 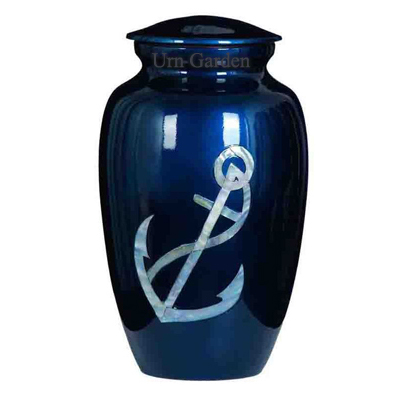 He was only 34 and had been stationed on the USS Ronald Reagan during a humanitarian mission to Japan during the 2011 tsunami. After the Fukushima nuclear power plant meltdown the ship sailed through the fallout three times. Over 70 sailors on board have suffered serious heath issues and half have developed cancer. His mother thinks he might be the first fatality stemming from this mission. It’s timely, as disturbing news continues to surface regarding VA hospitals and treatment, or lack of treatment that our veterans continue to receive.

This young man leaves behind two young children and a family that adored him. We wish them all peace and healing during this difficult time.