Early examples of mourning  jewelry were found in Europe in the 15th and 16th centuries. Black and white enameled heads or skulls were often set into both rings and brooches and worn to signify a period of mourning after the death of a loved one.

The Death’s Head motif (skull) was still used on mourning rings as late as the 17th century. A ring presented after the execution of King Charles I in 1649 shows a portrait of Charles I on one side and a skull and a crown on the other. Inside the inscription reads, “The glory of England has departed.”

The presentation of mourning rings was a status symbol in the 17th and 18th centuries. The wealthy specified the ring design and quantity to be made in their wills.

Samuel Pepys, English diarist and naval official (1633-1703) willed that 129 mourning rings be given away at his funeral.

Either he had a large family or a huge ego. 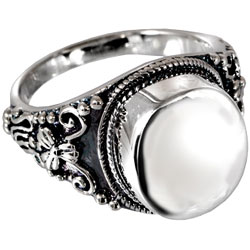