You are here: Home / ash scattering / Cast Away

As cremation has overtaken burial in California — about 52 percent of the dead are cremated, according to the National Funeral Directors Association — scatterings of remains have become a daily occurrence. Without anybody really noticing, San Francisco Bay has become an enormous burial ground.

Scatterings are done from boats, cliffs and the Golden Gate Bridge. Cemetery owner Buck Kamphausen said it is not unusual to see remains scattered off the back of ferries. He has found urns bobbing in the water. “We’ve done it at night, in the fog, in the rain. You have to say that if there is something spiritual about it, this is one of the most beautiful places in the world to have it done.”

Cremation does not appeal to everybody.

Mark Matthews, vice president of the Association of California Cremationists, said that for a variety of cultural reasons, Latinos and African Americans are less likely to cremate than other Californians. And he said higher-income people are more likely to cremate than people with less money. Several religions, including Judaism and Mormonism, frown on cremation. Islam forbids it.

“There are a lot of people that have died and are in the Bay,” said Curtis Brown, captain and operator of the Orca III, “Over the recent years, I’m sure there have been more people scattered in the water than buried in the Bay Area. I go out near the ocean, so ultimately the ashes can be scattered on the tides throughout the world. It’s kind of a liberating, freeing thing.” 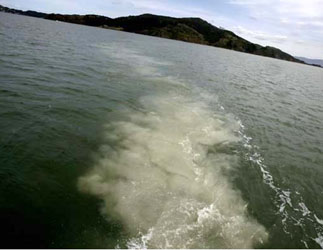 Ashes dispersed off the Orca III in San Fransisco Bay, Angel Island in the background.