American Indians have the highest per-capita participation in the armed services of any ethnic group. Cpt. Brett Lundstrom was killed in Fallujah on January 7, 2006 and was buried in

The body of Marine Cpl. Brett Lundstrom, lies in state in a flag-draped casket inside a 30-foot tepee set up in the gymnasium of Little Wound High School on the Pine Ridge Indian Reservation. U.S. Marines took shifts standing guard at the entrance. Lakota tradition is for the body to lay overnight to communicate with relatives who have passed before, and will guide him to the spirit world. 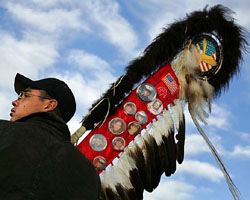 Staff of honor: Louis Kills Straight holds a staff adorned with buffalo hair and eagle feathers, along with photos of tribal members who are serving in Iraq.
“He earns the American flag from his government,” says Vietnam veteran John Around Him. “He earns the eagle feather from his people.”