You are here: Home / Confessions / Refreshments, Anyone? 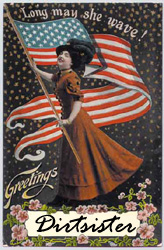 Last week was a sad week for pet owners, we had several calls from distraught clients who were dealing with the loss of an old friend. When we took our advisory team to visit the vet, there was an older couple getting ready to put down their pup after 14 years together. Seems everyone has a sad dog story, including yours truly…but not today.

We worked out a lot of frustration weeding and harvesting rocks. The big rocks are trophies and I collect them and give them a place of honor. “Shovel Buster” is my latest acquisition and is on display now.

Moved across town and helped Granny get her beds cleaned up. She’s my inspiration for this site (and in life), she started small memory gardens after the loss of her husband and son. She liked a military theme, after all that was how they had spent most of their life. Her husband, my grandfather was a complicated man and they spent over 50 years together. Several years after he died she said the only thing she needed a man for now was to run a chain saw.

She always makes me feel better and I often think about her as a young woman with four kids, with a man off to war, and years of moving a household coast to coast. I don’t know if I could handle it.

During the last years of his life, my grandfather would mix a few Manhattans , turn on the tape recorder and lay down his memoirs. I’m glad he did. Here’s an excerpt of a WWII experience when he was a 20 something Okie in the Coral Sea on the Yorktown:

“Our dive bombers scored a total of only two 1000 bomb hits but they were devastating. The Shokaku broke immediately in fire from stem to stern and from water line to the forepeak. They had ignited her aircraft fuel lines on the hanger deck. Wow-what a fire!

Then it was our turn. We had a good view of the Shokaku because she was afire and smoking heavily. We had only two enemy fighters attack us but our escorting fighters took care of them. The only thing wrong was that we were still dropping Mark Thirteen torpedoes and they ran, true to form, either too deep or they broached, and those that hit the ship simply bounced off as duds.

The Lexington planes didn’t fare too much better. They got one bomb hit on the Shokaki but, because of the stinko weather, they mostly got lost and milled around until it was time to return to base.

Meanwhile, our “bases” were catching it from the Japs, those Japanese torpedo and dive bombers were so much faster than ours that our fighters were amazed! For instance- their torpedo planes came in at a speed of 180 knots with torpedos attached…Our TBD aircraft were limited to about 120 knots with a fish attached.

The Yorktown took a bomb hit just aft of the super structure- right near elevator two. It went clear to the fifth deck (the armored deck) and exploded. It killed forty-one members of the Repair Crew Fire who were located in the Ship’s Service Compartment on the third deck. A lot more of those guys died later in sick bay.

When we arrived back at the Yorktown I couldn’t see much damage to her because all the damage was below decks. The bomb hit left nothing but about a ten inch hole in the flight deck where it went through. 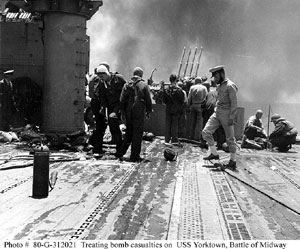 The Skipper of the Yorktown- Captain Elliot Buckmaster ordered the flight crews below to the ready room where they dispensed a shot of whiskey to all of us. Actually, it would have taken a lot more than one shot to assuage my feeling that evening. I was plumb shook from the day’s actions and tired as hell.

The next announcement was that the ships cooks were serving sandwiches in the crew’s mess, below.

Now, the crew’s mess hall was right next to the sick bay, and one had to go through the passageway outside sick bay to get to the mess hall. The salvage and repair crews had stacked all of the dismembered and unidentified parts of human bodies from Repair Five in that passageway like a big stack of hay….Then, too, the water from fighting fires was sloshing back and forth across the deck- about four inches deep. Of course it was mostly blood from the pile of arms, legs, torsos, intestines, etc. in that stack. Then, there was the smell of butchered flesh. It smelled just like a slaughter house smells. To say the least- by the time I saw and smelled all of that, I sure as hell didn’t want a sandwich. In fact, I don’t remember being too hungry for several days after that. All night long, that night I could hear the funeral prayers being said and the sound of the bodies being ceremoniously dumped over the side in to the sea as their last resting place.”

Today’s tat, selected for the bleeding hearts we spotted coming up: 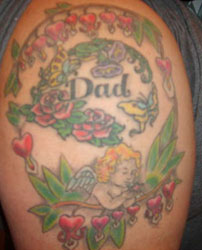 Your tip for better living: Be a superhero.