You are here: Home / Confessions / What’s That Smell?

Free in the garden today! Excellent color and a hot cup of coffee! 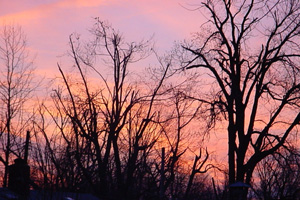 I can see why ancient cultures worshiped the sun!

Speaking of inspirations and connections, we re-connected with a favorite teacher/guru last week who is always good for the mind, body, and spirit and wondered why we had drifted away. Well, time to get back on track….and breathe!

“When a sick man wants to know his true condition, he touches a bit of bread to his lips and throws it to a dog; if the dog won’t eat it, the man knows that he has a very short time to live.” Perhaps this is ancient wisdom, since modern studies indicate that dogs have the ability to detect terminal illnesses.

“If cocks crow, dogs howl or foxes bark unexpectedly near a sick room, the patient may die at any moment.”

“When a dog under the cabin, or on the front porch, howls four times and then stops, it is said that there will be a death in the house very soon. If a cat licks the door it is a sure sign that somebody in the house will die shortly. It’s a bad sign for a rooster to crow in the doorway, or crows seven times in front of the door without turning around, it mean that someone in the family is going to die soon, whether any of them are sick now or not.”

“A crowing hen will excite any group of backwoods people; I have seen a man spring up and fire his revolver wildly into a flock of chickens, killing several. Some people do not hesitate to eat a crowing hen, but this man would not allow one to be cooked in his house. “Throw it to the hogs, and if they won’t eat the damn thing, we’ll sell it to the tourists!”

“Whippoorwills seldom alight on buildings, but if one does come to rest on the roof of a house and gives it’s characteristic call, there will be a death in the neighborhood within 24 hours.” Same with any sort of bird rapping on a windowpane.

A bat in the cabin is even worse than a songbird, but a screech owl is worst of all. One cry from this bird, even if it is only in the dog run and not in the house proper, will upset almost any backwoods family. Mother will jump instantly to throw salt on the fire and children begin to tie knots in a string. Throwing a handful of salt or feathers on the fire will usually silence a screech owl outside the cabin, the smell seems to settle the bird. If there happens to be a sick man in the place, every effort is made to kill the owl, so that it’s body may be laid warm and bleeding on the patient’s chest.