Spotted a sweet mullet this weekend. One of the most exquisite, perfectly coiffed styles I’ve seen in a long while and has respectfully earned a spot in the hair hall of fame. I have a virtual hair museum that you can visit on Pinterest. The guy in the camo was spotted at blues and barbeque event. Later, in the year, seated in front of me at the Springfield Cardinals ball park, I was delighted to discover another beautifully styled mullet to add to the hair museum.  I do love a well-done mullet, or as we called them in the ’80’s a “Bi-Level”. This gentleman also has been added to the collection. 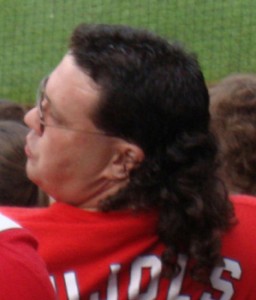 At the peak of the trend of this particular style, I wanted this look and my mother, who was a hairdresser absolutely refused. So, my childhood friend who lived across the street, Laurie did it for me in our garage. Laurie was a couple of years older and planned to  attend cosmetology school, or as we called it:  beauty school.  She did a pretty good job, mother was not thrilled that my senior portrait would capture this moment in time.