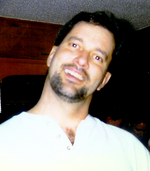 James N. Rogers passed away peacefully at St. John’s Hospital after an illness with his family and friends by his side November 9, 2007. He was born in Springfield, Missouri.

James graduated from Hillcrest High School in 1976 and worked for Paul Mueller’s and Watson Brothers Drywall. He was united in marriage to Debbie Watson December 21, 1982, and to this union one child was born, Sarah Marie, on July 4, 1983.

James loved spending his time playing softball, watching his favorite NASCAR driver, Jeff Gordon, or just soaking up the sun at the lake, but most of all he loved to spend time with his two granddaughters, Amirah and Angel, and his two grandsons, Joseph and Dominic.

The family would like to thank the staff of St. John’s for the care and support of James, especially Dr. Evans, Cris, Jessica and Amanda. We appreciate your kindness during James’ last stay.