You are here: Home / Confessions / Goodbye To A Class Act, Brooke Astor 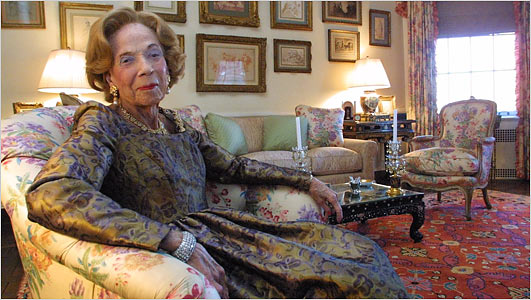 Brooke Astor, New York City’s unofficial first lady died on Aug. 13 at age 105. She was known as establishing her presence in both the luxury apartments of Fifth Avenue and the tenements of East Harlem, using her inherited millions to help the less fortunate.

Mrs. Astor’s money came from her third husband, Vincent Astor, who was heir to the fortune of John Jacob Astor and who when he died left about $60 million to her personally, and an equal amount for a foundation â€œfor the alleviation of human suffering. She decided that because most of the fortune had been made in New York, it should be spent in New York, and her grants supported museums and libraries, homes for the elderly, churches and other institutions and programs.

She enjoyed quoting the leading character in Thornton Wilderâ€™s play â€œThe Matchmaker,â€ saying, â€œMoney is like manure; itâ€™s not worth a thing unless itâ€™s spread around.â€

For the past year, the handling of her affairs and her care have been the subject of controversy and court battles, in a sad footnote to her long and storied life.