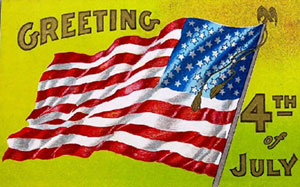 After spending the past two decades living in London, he was bitterly disliked by his fellow commissioners and viewed with suspicion by many Americans back home, some even thought he might be spying for the British. His son William, the former royal governor of New Jersey, was a notorius Loyalist, was under arrest in America.

But the French loved him, and he was able to persuade France to support our cause.

Franklin returned to America in 1785 and died five years later. Washington’s published eulogies numbered in the hundreds, Ben Franklin received only one public eulogy delivered by Franklin’s arch enemy Reverend William Smith (he was assigned the task by Jefferson).

France honored Franklin with a eulogy by Mirabeau, delivered in the French National Assembly, published it and declared three days of mourning. By contrast, the U.S. Senate refused to joining the House in endorsing a resolution honoring Franklin.

Franklin’s image improved after the release of his Autobiography in 1794, and Americans finally appreciated the patriot and scientist. They discovered that Franklin had been a symbol for their cause, a self-made man and a shaper of his own destiny.

Source: Revolutionary Characters, What Made the Founders Different by Gordon S. Wood